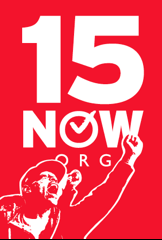 Our Vision for Building the Movement for $15
Social and economic inequality in the US has reached historic proportions. The top 1% increased their income following capitalism’s Great Recession while the overwhelming majority of working people are still struggling or are even worse off than before. We demand social justice and a dignified life for all workers.

The movement for a minimum wage of $15/hour is an expression of this enormous problem of inequality. The support for the fast food workers actions for $15 showed that the aspirations of Occupy to fight against poverty and inequality are alive and growing among millions.

The struggle to raise the minimum wage is a lively and dynamic movement which is developing all across the US. 15 Now is part of this wider movement, open for all to join and fight with us.

We aim to build the widest possible unity in action of labor, community, and social justice organizations.

15 Now is a national organization which aims to build on the victory of a $15 minimum wage in Seattle, achieved through an enormous grassroots effort by low-wage workers and activists. Launched initially by Seattle City Council member and Socialist Alternative activist Kshama Sawant in January 2014, 15 Now has grown to encompass broad support in dynamic and winnable campaigns in many cities across the country, including Portland, OR, Philadelphia and Minneapolis.

Our goal is to empower working people and activate them into fighting movement. We aim to build a network of activists, organized in Action Groups in neighborhoods, on campuses and in workplaces, or through allied trade unions, community and immigrant rights organizations.

This is our vision across the US: People organizing from below can challenge the 1 percent’s domination of economic and political system and change the balance of power in our society. The key to winning is building up the power of working people expressed in their level of organization, consciousness, unity and determination to struggle.