FIFA: The World Cup Should Be Played on Natural Grass

While we were not able to convince FIFA to change the playing surface for the 2015 World Cup, we did succeed in getting FIFA to commit to natural grass for all future Women's World Cups, and we showed the world how professional athletes can ban together to demand that women have access to the same playing conditions as men. Thanks to this global effort, women in professional soccer around the world are demanding more -- and getting it. Let's keep fighting and winning! 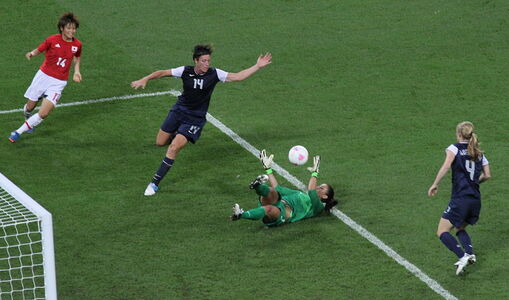 We, the undersigned, are calling on FIFA to modify the venues for the women's 2015 World Cup games to fields with natural grass.

Original text:
In 2012, the Women’s Gold Medal soccer match for the London Olympics was the NBC Sports Network’s most watched event in the network's history with 4.35 million viewers. More people around the world livestreamed the women's final than any other sporting event during the Olympics.

When Abby Wambach -- the 2012 FIFA Women's World Player of the Year -- heard of this news, she noted, "The men would strike playing on artificial turf." And Wambach, who is known for her physical style of play, should be especially worried. The American Academy of Neurology recently reported that concussions appear to be more prevalent for certain athletes playing on artificial turf, and that women athletes appear more likely to experience concussions in soccer than in other sports.

Artificial turf has been blamed for increased injuries on sporting fields, including more sprained ankles, concussions, turf burns, and an injury known as "turf toe." Overheating is also a health concern for athletes since temperatures can be hotter on artificial surfaces than on natural grass. Finally, turf is widely known to alter the speed and quality of play on the field. With all of this in mind, it's not hard to understand why many players feel that being forced to play their World Cup on artificial turf is gender discrimination.

I'm a huge fan of women's soccer. I love going to Washington Spirit games -- where the team plays on natural grass -- and I'm excited to attend the upcoming CONCACAF qualifiers for the Women's World Cup. These women deserve respect for their athleticism and that's why I'm standing up with professional players from national teams around the world who have spoken out and signed on to this campaign as well.

Some of the best soccer players in the world deserve to play the most competitive matches of their lives on real grass. FIFA has the power to modify the venues for the World Cup games to fields with real grass. Do the right thing, FIFA, and give professional women soccer players the respect they deserve.

----Signatures from Players----
More than 70 national team players from at least 17 different national teams have signed this petition to FIFA calling for natural grass in the 2015 Women's World Cup. Below is a list of professional players who've added their name to this public petition:

Petition is successful with 22,950 signatures

Did England goalkeeper Karen Bardsley catch a turf pellet in her eye during last night's game?

The artificial turf continues to be an issue in this Women's World Cup. Michelle Heyman of the Australia women's team told reporters: "You wouldn't want to see the bottom of our feet after a game. They just turn white. The skin is all ripped off; it's pretty disgusting. It's like walking on hot coals with your skin ripping and slowly cracking, constantly." Read more about how players are attempting to manage turf-related injuries during this World Cup: http://sports.yahoo.com/news/there-s-nothing-fake-about-issues-with-artificial-turf-at-women-s-world-cup-200746963.html

Concerns are mounting as the artificial turf inside World Cup stadiums in Canada have already hit 120 degrees. Read the full story here: http://thinkprogress.org/sports/2015/06/08/3667111/concerns-mount-artificial-turf-hits-120-degrees-womens-world-cup/

The players have withdrawn their legal complaint on the use of artificial turf. Abby Wambach, one of the leaders of the complaint, told press "I am hopeful that the players’ willingness to contest the unequal playing fields – and the tremendous public support we received during the effort – marks the start of even greater activism to ensure fair treatment when it comes to women’s sports." Read more here: http://www.nytimes.com/reuters/2015/01/21/sports/soccer/21reuters-soccer-women-turf.html

The entire Australian women's national team has threatened to join the legal fight against the use of artificial turf in the 2015 Women's World Cup if a resolution cannot be reached. Read more, here: http://www.insideworldfootball.com/fifa/15948-aussie-women-join-calls-for-world-cup-2015-to-be-played-on-grass

The U.S. National Soccer Team Players Association issued a statement Monday saying its members "fully support the women's national team players from around the world in their efforts to play on natural grass at the 2015 Women's World Cup." They continue, "To play the Women’s World Cup on artificial turf would be a serious mistake." http://www.ussoccerplayers.com/2014/11/usnstpa-statement-on-womens-world-cup-turf-issue.html

Alex Morgan says in an interview that she is "very optimistic that we will get something settled" on the issue of artificial turf in the World Cup. More here: http://www.tulsaworld.com/blogs/sports/johnehoover/john-e-hoover-u-s-women-deeply-concerned-about-world/article_54fbdc1c-316e-5608-81a4-551299fd0868.html

On October 1st, attorneys representing 40 of the top female soccer players in the world filed a lawsuit in Canada. The lawsuit alleges that FIFA and CSA's decision to play the 2015 Women's World Cup on artificial turf is gender discrimination. More here: http://www.cbsnews.com/news/female-soccer-players-file-discrimination-suit-over-womens-world-cup/

Major Canadian news outlet CBCNews reports that "gender discrimination allegations dog promotional efforts" for the upcoming World Cup. Former Canadian national team player Carrie Serwetnyk told reporters "They would never in a heartbeat think of putting anything less than grass for the men," she said. "They'd protest. It would be a scandal." Read more: http://www.cbc.ca/news/canada/british-columbia/fifa-women-s-world-cup-gender-discrimation-allegations-dog-promotional-efforts-1.2756465

Players across the NWSL are participating in the #GreenUp challenge, wearing green pre-wrap at games to show they're against gender discrimination in soccer. https://twitter.com/thesamegameorg

The New York Times reports on this petition and the decision by players to retain legal counsel. http://www.nytimes.com/2014/08/13/sports/soccer/players-threaten-suing-fifa-ahead-of-womens-world-cup.html

Many of the professional women soccer players who signed this petition urging FIFA to use natural grass in the 2015 Women's World Cup have now retained legal counsel. Read more: http://womens.soccerly.com/2014/08/05/players-retain-legal-counsel-fight-artificial-turf-2015-womens-world-cup/

During this week's USWNT game against Mexico, commentators JP Dellacamera and Kate Markgraf voiced their opposition to the use of artificial turf in the women's World Cup. Listen: https://soundcloud.com/jess-kutch/jp-dellacamera-object-to-use

https://twitter.com/AbbyWambach/status/314882077399068672 The tweet that triggered a national movement of players and fans against artificial turf in the 2015 Women's World Cup.