To: CENTENNIAL COAL - PAY OLDER WORKERS WHAT THEY ARE OWED.

Centennial Coal: Have a Heart

After being denied up to 64 weeks pay in retrenchment entitlements for more than 18 months, 13 workers from Centennial Coal will finally get paid. This is an important victory against discrimination and corporate misbehavior -- even though these workers never should have had to put up such a hard fight to get what they were rightfully owed. In addition to the petition on Coworker.org, this fight also involved actions in the Federal Court, the Australian Human Rights Commission and the Fair Work Commission. 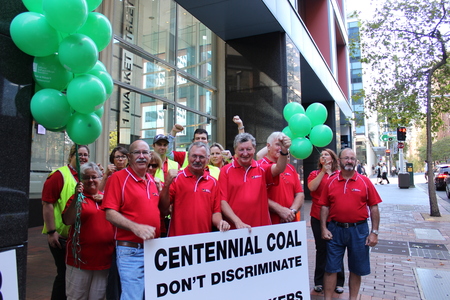 The Federal Court and the Australian Human Rights Commission have said that Centennial are discriminating by not paying older workers their full retrenchment entitlements.

CENTENNIAL COAL, DO THE RIGHT THING. PAY OLDER WORKERS WHAT THEY ARE OWED. WATCH OUR VIDEO: http://youtu.be/n7PnLwF1kOk

In 2013, when I was 63 years old, Centennial Coal made me redundant. When people are made redundant, they rely on their entitlements to feed their families, stay in their homes, and pay for necessities. But Centennial Coal has refused to pay retrenched people like me -- anyone close to age 60 and over -- the full entitlements we’re owed.

Centennial -- which started as a local company, but is now owed by a giant multinational company called Banpu -- is the only company in the Australian coal industry that does not pay proper entitlements to workers of my age. At the same time, Centennial Coal reported that its Australian operations brought in over $213 million (USD) profit in 2013. It is just not fair.

To be honest, I feel like I was targeted for my age. I worked at the Myuna mine for over 31 years. I am fit and healthy and I wanted to keep working, but now that I’m unemployed and without my entitlements, I'm facing trouble in my old age.

But this isn’t just about me and the other miners losing our jobs. Our families and communities are deeply impacted too. I have two children -- one of whom lives across the country with my two grandchildren. Centennial’s decision to deny us entitlements means that I’m not able to visit them as often and see them grow up.

Work doesn’t stop at 60 and neither should the entitlements we’re owed. Please join me in calling on Centennial Coal to do the right thing and pay older workers the retrenchment entitlements we are owed.

Petition is successful with 3,239 signatures

Petition is successful with 3,238 signatures