Let us have beards!

We did it! Publix said it will allow store employees to wear beards starting on September 29, 2018. 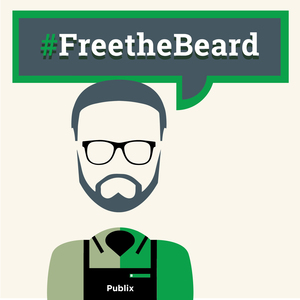 I want Publix Super Markets to review its dress code on its facial hair policy, which will also allow them to look at the other dress code policies in affect that may need modernizing (hair length, earrings policy, etc.). I believe that the majority of the people I work with at Publix also believe that we should be allowed to have some facial hair besides only a mustache. We should be allowed to have a beard, with limitations on how long it can be and a beard net for the employees who work with food.

Publix already allows beards at its new GreenWise markets and it has been successful, so why not implement this new dress code policy in the overwhelming majority of its business?

Petition is successful with 20,484 signatures

"On Friday, Publix said it would allow store employees to wear beards, turning back decades of clean-chin tradition.

The new policy, which goes into effect Sept. 29, is the culmination of a long debate with employees over the issue.

Publix, Florida’s dominant grocery chain, began a trial allowing beards earlier this year at stores in North Carolina and Jacksonville but is now taking it to all 1,196 stores and 190,000 employees." https://www.orlandosentinel.com/business/consumer/os-publix-beards-facial-hair-20180921-story.html

20,000 signautre's. Wow! You supporters have been nothing short of great. From signing the campagin to spreading it around to coworkers, the support has been overwhelming. All of this has not been for nothing. A couple of months ago, Publix started rolling out "pilot programs" for certain districts to test out store employees being able to have facial hair. This is a win in and of itself and lucky for those who are in these districts. I plead that you continue to follow the guidelines that Publix has given you in regards to the "pilot program," and for anyone else not included, to continue to follow the dress code. On top of this, more and more Publix Greenwise stores are being planned, stores that allow employees to have facial hair. Let's continue to spread the campaign to coworkers, friends, families, and continue to serve our customers to our utmost ability. I believe that change will be storewide in no time.

The campaign was also featured in Cooking Light Magazine: http://www.cookinglight.com/news/publix-facial-hair-beard-policy

Check out new coverage of the campaign in the Lakeland Ledger: http://www.theledger.com/news/20180331/hairs-thing

Here's a new and easy way that you can spread the message of the campaign and show your support:

Update your Facebook profile photo with this custom frame calling on Publix to #FreeTheBeard! It just takes a minute and it's a great way to grow support for the campaign. Click here to get started: https://actionsprout.io/E27B75

Publix stated on Twitter on January 20, 2018: "we are currently piloting guidelines that include allowing our male associates to wear neat, clean, and professional beards and goatees in a few Publix locations." https://twitter.com/Publix/status/954860480023220226

Florida media outlets are reporting on all the Publix employees joining this effort: http://www.wtsp.com/news/local/polkcounty/publix-no-beards-for-employees/129643237

Just hit 13,000 backers! The campaign is still moving strong and growing. We have a few ways for you to get involved if you would like.
1. Join: http://moteam.co/publix-super-markets
Movember is a foundation that supports men's health. To participate, all you have to do it grow out your mustache for November. If you would like, you can also donate to support men's health and participate in the challenge of exercising everyday (Move).
2. I just created an Instagram account: @Publix4Beards.
You can participate by following the page, and sending in pictures of yourself. These pictures can be with you wearing your Publix uniform with your mustache, holding up the #freethebeard hashtag, or any other great idea's you may have. Make sure that you tag @Publix4beards and #freethebeard hashtag so I can upload them to the Instagram account.
Thank you all for your support,
Brandon Wesley
https://www.instagram.com/publix4beards/
http://moteam.co/publix-super-markets

Check out new press coverage of the campaign from The Tallahassee Democrat! http://www.tallahassee.com/story/news/2015/06/25/freethebeard-petition-requests-publix-relax-facial-hair-policy/29283421/

Wow! We just hit 10,000 signatures in under three weeks! We are getting a lot of media attention and Publix definitely knows about this petition. Now, I'm asking you to take a picture supporting the petition and to post it on social media using the #MyPublixStory and #FreeTheBeard hashtags.
Here's what you do:

1) Take a photo supporting the campaign: Ideas include a photo of yourself holding a piece of paper with the hashtags on it; grow out a mustache and take a photo of your 'stache'; or simply attach the petiton link to a tweet or Facebook post with the #MyPublixStory and #FreeTheBeard hashtags.

Were doing great everyone! Already at 6,500 signatures and counting in a little more than a week. Here is another few media articles about this petition, it is gaining attention, and just a matter of time before they say something! I want you to continue to post comments about your reasoning after you have signed the petition because in these articles, they are using some of the comments in them as well. This isn't about me, or anyone one person, it's about making Publix a better place to work. So thank you guys for everything and keep it up!
http://money.cnn.com/2015/06/01/news/publix-beard-petition/
http://www.theledger.com/article/20150601/NEWS/150609962?p=1&tc=pg

Keep it up everyone! We are getting more and more attention. Another news website, the Examiner, has also made an article about this petition.
http://www.examiner.com/article/publix-employee-fights-for-the-right-to-goatee

Great job everyone, we hit 5,000 signatures! Keep spreading the word around. Attached is an article from an Orlando newspaper about this petition. Thanks!
http://www.orlandosentinel.com/business/os-publix-facial-hair-20150529-story.html