Close DSF4 for deep cleaning and pay workers for the time off work. 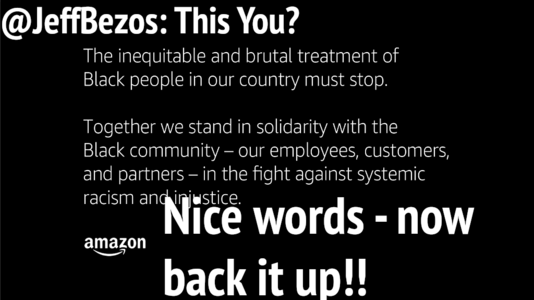 On July 2nd Amazon sent an alert to workers saying that someone at DSF4 had tested positive who was last on site on June 19th. Since the first announcement we've had two more cases confirmed. it's nearly impossible to know how much the infection has spread, we are demanding that you value the lives of the workers of color at DSF4, shut down the facility for 2 weeks of deep cleaning, and pay us all during the time that we are unable to work.

Amazon has made numerous statements in the recent pass saying that it supports Black lives - for instance in a twitter post it wrote:

"The inequitable and brutal treatment of Black people in our country must stop.
Together we stand in solidarity with the Black community — our employees, customers, and partners — in the fight against systemic racism and injustice."

Black and Latinx people are significantly more likely to be impacted by coronavirus than people of other backgrounds. This is the result of the systemic racism and injustice Amazon claims to stand in solidarity with us against. If that's the case, they should be willing to forego the service of this facility long enough to ensure that workers are as safe as they possibly can be. 1 preventable death is unacceptable. Shut down this facility in defense of Black lives!

We're riding on Amazon with a caravan supported by a coalition of workers from Tesla, McDonalds, Gig Workers Rising, Gig Workers Collective, ILWU and many more...

This is a thread I wrote about how Amazon only uses social distancing as a way to punish organizers. They're not committed to a safety culture. I took pictures over the course of 3 hours of a social distancing violation that went unaddressed for 4ish hours. We have an ACTIVE outbreak - we really have to take this seriously. I don't want to get my family sick.

I (John) will be out supporting this event. If you can, please come out. We have to let Amazon know that none of their employees will be left to fight alone. Backing up Whole Foods workers who are being sent home for wearing Black Lives Matter gear is part of our fight too. This is further evidence that Jeff Bezos and his executives don't mean it when they say they stand in solidarity with the Black community.

We just got a notification of two more positive tests in our facility. Please share this with others and help us reach at least 5000 signatures by Aug 1! We need your help!

We just broke 1000 signatures - thanks for your support everyone! Sign up for our newsletter at www.bayareaamazonians.org to stay up to date on what we're working on. And please continue helping us spread the word about this petition - we need to let Amazon know the world is watching!