To: Trader Joe’s and ALDI

While Trader Joe's still refuses to provide hazard pay to the thousands of workers who are putting ourselves on the front lines of a global pandemic, our petition raised awareness among our coworkers of the power of collective action. It appears we also may have inspired other grocery workers to petition their companies to provide hazard pay, many of which have been successful. Sadly, Trader Joe's is hoping that maintaining an image of compassion will excuse the company from having to tangibly act with compassion.

The company used the existence of this petition to lie to workers, telling them it was a trick to get people to sign their name to the union effort. That is so emphatically untrue. Telling crew that to scare them is a cut and clear Unfair Labor Practice violation. Their attempt to union-bust as we cry out for help amid a global health crisis makes it clearer than ever where corporate's priorities lie – and the work we need to do to get them to act right.

Our win is not because Trader Joe's is providing its workers common sense policy, but because our fellow crewmembers are now unshakably aware that this company will refuse to do what's right if we remain quiet. 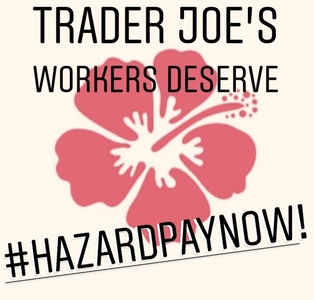 ***TRADER JOE'S WORKERS: If you are interested in joining our union efforts, email [email protected] and in the coming days you will receive a survey and next steps!***

Trader Joe’s workers — from the distribution warehouses to the stores — need hazard pay now. As the company rakes in millions of dollars amid the frenzy of people across the country filling our stores to stock up, grocery workers are at the frontlines of this global pandemic and we are terrified.

We are exposing ourselves (and our loved ones) to COVID-19. We aren’t being paid for the extra work we’re doing or the risk we’re undertaking. We’re being told we can’t wear gloves. We are terrified.

We need our company to have our back by introducing hazard pay at the rate of time and a half, plus guaranteeing forced closure pay. Workers who are typically scheduled a certain number of hours per week need to be guaranteed that if their store closes, they will continue receiving pay equal to their average scheduled wages. For example, someone scheduled full time would receive a biweekly check totalling how much they would earn for 70 hours of work — that is two weeks of 40-hours, minus ten 1-hour lunch breaks through those two weeks.

According to the UN, hazard pay is “a form of compensation granted to staff members who have been requested to remain and report for work in duty stations where very hazardous conditions, such as war or active hostilities, prevailed and where the evacuation of families and nonessential staff had taken place.”

We are in the middle of a global crisis. Trader Joe’s — and grocery stores at large — are ensuring our communities can safely and comfortably quarantine/self-isolate. But the workers stocking the shelves have not received any sort of security from Trader Joe’s corporate or ALDI, which owns Trader Joe’s, that we can be compensated for the essential service we are providing.

Trader Joe’s offered to reimburse sick time for any worker who becomes ill for up to one week. That is insufficient — it requires workers to work until they get sick before they can receive any compensation for putting their lives in danger, and it does nothing to answer concerns of part-time or new crewmembers who don’t qualify for medical insurance should they become ill.

Trader Joe’s proudly employs elderly and disabled workers, two demographics that are most at risk for becoming critically ill from COVID-19. Yet those workers can’t afford to avoid work and keep themselves safe.

Grocery stores and hospitals are on the frontlines right now, but grocery store workers don’t have access to the same precautions and resources as hospital workers. Hazard pay and guaranteed closure pay provides security, comfort, and increased morale knowing our company has our backs.

Petition is successful with 20,058 signatures