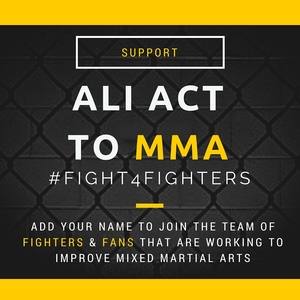 MMA is the fastest growing sport in the world. Mixed Martial Artists should be treated like professional athletes. Agree? Add your name to join the team of fighters & fans to support the Muhammad Ali Act to MMA.

MMA fighters should have the same rights & protections as other professional athletes. The Muhammad Ali Boxing Reform Act is a federal law that was enacted 16 years ago to protect the boxers from exploitation, eliminate conflicts of interest, and increase integrity in the sport. The Ali Act should also include Mixed Martial Artists.

MMA is the fastest growing sport in the world. Mixed Martial Artists should be treated like professional athletes. Fighters should have the right to know how much money a promotion is making from an event. Fans should have the right to see the best possible fights through independent rankings.
Extending the Ali Act to MMA would help professionalize the sport & stop the conflicts of interests that currently exist in the sport.

In person. To elected officials.