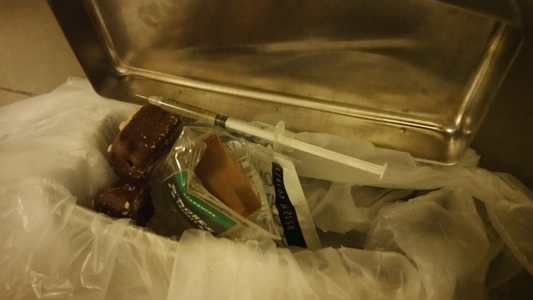 Put safe needle disposal boxes in the bathrooms of high-risk areas so that employees are protected/stop getting poked and exposed to HIV/AIDS, Hep C, Hep B, etc.

*Added 1/21/19 The author of this petition ended up getting poked by a dirty needle themselves, after two other coworkers were poked in the same cafe, not long after starting this petition. Since then, the author went to local Seattle news crews, and only after their story aired did Starbucks put safe sharps disposals in six cafes in Seattle, but they were only the cafes that already had an L&I complaint and fine about this issue before. The author still has yet to hear directly from anyone at Starbucks Corporate. The author still fully intends on hand-delivering this petition to Starbucks HQ. The author is obnoxiously tenacious like that.

Exposure to HIV/AIDS, Hep C, Hep B, etc. is a risk in Seattle where there is a heroin/hep c crisis--and an HIV outbreak in at the same time and in the same area that baristas were getting poked by used drug needles while at work. There is no vaccine for Hep C, the available treatment is not a 100% assured cure, and Starbucks refuses to comment to employees when employees mention this risk. Employees risk getting poked, and DO get poked, even when following "protocol" of using gloves and tongs to dispose of used needles left in bathrooms, tampon disposal boxes, and diaper changing stations. It costs almost two thousand dollars just for one round of after-exposure shots, not including other tests, shots, medications, etc. Employees have to pay out-of-pocket for this before being reimbursed until Starbucks's company insurance kicks in. Many baristas cannot afford that, instead resorting to loans and credit cards. Employees who are pregnant or already immuno-compromised have an added risk if poked by a used needle. Employees also have to then use added protection with their sexual partners/spouses for six months minimum/risk exposing them, too. Starbucks makes various excuses from "it looks bad" to "drug users will just take the boxes off the walls and steal the needles." Employees cannot legally be forced to remove needles, but when they ask to call hazmat, they're told "hazmat cost comes from the individual store budget" (a veiled threat of even less staff coverage on an already short-staffed floor because no money to pay them if it is used for hazmat). Making coffee should not come with this kind of easily detoured risk.

We're in Seattle--We'll deliver it to HQ in person.

Business Insider reported on April 22, 2019:
"Starbucks' efforts to address opioid use and improperly disposed needles in its bathrooms are expanding. Starbucks stores in at least 25 US markets have installed needle-disposal boxes in bathrooms in recent months. By this summer, the chain aims to have installed sharps boxes in bathrooms in all regions where such action has been deemed necessary." https://www.businessinsider.com/starbucks-needle-disposal-boxes-more-locations-2019-4

"As of Wednesday, more than 3,700 people have signed a petition on Coworker.org calling for Starbucks to place needle-disposal boxes in high-risk bathrooms."