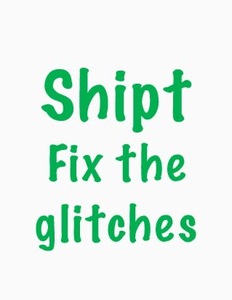 Shipt shoppers respectfully request that Shipt accept accountability of all the glitches that exist on it’s platform and establish a page on its shoppers website that acknowledges all known platform glitches and an anticipated fix date for each known app glitch. The page should also provide a “report glitch” function that allows shoppers to report app issues they experience.

Shipt’s platform glitches take time and money away from shoppers.

Since Shipt has fully implemented The California Protect App-Based Drivers and Services act on it’s platform, California Shipt shoppers have been timed out erroneously from the platform due to an app glitch and shoppers have also reported to Shipt that they are not getting an accurate guaranteed minimum due to the current app glitch.

In compliance with California’s Protect App-Based Drivers and Services Act, Shipt created a step on it’s platform requiring shoppers to swipe “Head to Store” when doing so as a way for Shipt to record a shoppers engaged time and miles.

After an app update on Oct 20, 2022, shoppers began to notice an issue with the head to store time in the app. For delivery only orders, the head to store time changes by the minute and for Shop and Deliver orders the app resets, forcing shoppers to re-swipe Head to Store. In some cases, shoppers who have already started shopping, are forced to re-swipe and rescan the barcodes for all the items already shopped. This would also mean all the time spent shopping an order and miles driven to the store would not be accurate.

Pursuant to this act, a network company shall ensure a guaranteed minimum for each app-based driver that cannot be reduced and shall apply for all engaged time spent completing that rideshare request or delivery request.

The act defines “engaged miles” as all miles driven during engaged time and “engaged time” is defined as the period of time, as recorded in a network company’s online-enabled application or platform, from when an app-based driver accepts a rideshare request or delivery request to when the app-based driver completes that rideshare request or delivery request.

These app glitches are in breach of California’s Protect App-Based Drivers and Services Act, which was overwhelmingly approved by California voters in 2020.