To: Amazon and Whole Foods Leadership 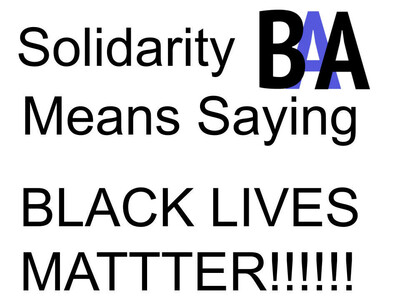 Amazon.com Inc. and all of its subsidiaries should require every executive (incl. Jeff Bezos, Jay Carney, Dave Clark, and Omar Gaye to name but a few) to create, and make publicly available a video recording of themselves saying the words "Black lives matter."

Recently Whole Foods workers have been sent home for wearing Black Lives Matter paraphernalia at work, on the grounds that they are somehow controversial. Respectfully, we beg to differ. As an Amazon employee, and a Black American descendant of enslaved peoples in this country, I must say, that anyone who believes that the words Black Lives Matter, are controversial suffers from an unfortunate delusional state induced by years of conditioning in white supremacist ideology.

Workers should not be forced to choose between earning a living, and asserting that the lives of other human beings have value. Whole Foods is wholly wrong to have ever enforced this policy. Nothing short of a full throated apology and a sincere commitment to sit down, shut up, and LISTEN to us, will do at this point. This is not a request. It is a demand.

Words have meaning, and you can't claim to be in solidarity with the Black community, and then show the reckless indifference to Black and Latinx lives that Amazon is demonstrating currently. While you're here sign our petition to shut down DSF4 for deep cleaning. We've had 3 confirmed cases of COVID 19 reported in the last month and management is lax about enforcing social distancing unless it's to get rid of an organizers like Hibaq Mohamed or myself. Workers should not be retaliated against for speaking up for the safety of themselves and their colleagues. Standing in solidarity in the fight against systemic racism and injustice means being willing to say that Black Lives Matter AND act on that truth by treating Black employees with the dignity and respect that we deserve.